Just a quick post, but kind of an interesting one.  Back from the honeymoon, where my lovely wife and I traveled to the Outer Banks of North Carolina.  We stayed in a condo for a week, then traveled up NC 12 to Kitty Hawk and crossed the Chesapeake Bay Bridge-Tunnel (turns out I get really claustrophobic in that tunnel, which is odd given I don't recall having problems with the Eisenhower Tunnel).  We then had about 30 hours to kill before we had to be in Raleigh, so Laura decided spur-of-the moment that we needed to go to DC.  We got there around 5:30 (rush hour, AAH!), went into the Smithsonian Institute of Natural Science, and saw the White House, Washington Monument, and WWII Memorial before leaving that same evening.  As much of our vacation involved driving, we decided to keep track of license plates starting from when we left the airport and culminating when we returned to the airport.  It was fascinating to see how many states we got!  Here is our list in no particular order (*=we were in that state):


States:
We were only missing Hawai'i (duh), Idaho, Arkansas, and North Dakota.  Of those, we saw several Idaho and Arkansas as we drove from the KC airport back to Nebraska, but we had agreed that those wouldn't count on the "official" list.  We did see a couple other interesting ones as well:
We likely saw other Canadian ones, but I'm not very good at recognizing them on the fly.  I had never seen a Diplomat plate before; that was cool.  We thought we had seen French and German plates, but we then realized that since North Carolina does not require front license plates, some people were using fake European plates on front. Confusing.

We also added four states plus D.C. to our list of states traveled to.  My map of states is below: 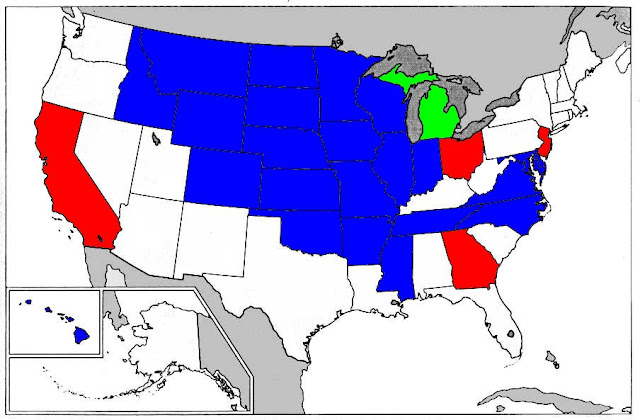 I may post a blog at a later point about the differences in signage from the East Coast and the Midwest; I found it very interesting!  It's a bit of a hobby of mine.
Posted by Stretch Longfellow at 11:05

Stretch Longfellow
Writing reviews, rambling about topics, or occasionally providing educational material in the form of the digital word. Not bad for a cartoonist and science teacher.